The Stranger on Bergsunds Strand – The Story of Nelly Sachs (2003)

Poet Nelly Sachs lived in exile, wherever she lived, whomever she lived with, whichever language she was surrounded by. When she received the Nobel Prize in literature, in 1966, very few people in Sweden — her country of residence, the country which handed out the Prize – had any idea who this elderly lady from the south banks of Stockholm was. She lived half of her life in a studio apartment, one single room, some of the time sharing it with her mother. She spoke poor Swedish, and she did not receive the prize as a Swede. Nor as a German, although she wrote in German. She received it as a Jew, an identity she did not claim for herself.

Nelly Sachs arrived with her mother in Sweden in May 1940, as a refugee from Nazi Germany. She was fifty years old, Jewish by birth, but completely assimilated. No wonder she had not left her native land when most other Jews did. No wonder she and her mother could bring nothing of the family’s exceptional wealth – they had owned a whole block in Berlin, as well as factories. Nelly had been an exceptionally privileged woman, but only in economic terms. In the midst of all that wealth she had lived apart, in internal exile. She was Jewish, but did not feel a Jew. She was German, but did not partake in German life. “There is something like a gap in her life, throughout the 1920’s and 30’s” says a friend of hers. “I have no idea what she did during those years, in Germany. There is a mystery there.”

Nelly liked to write, prose and some poetry. But only in her spare time, and she had hardly published anything. After her father’s death, in 1933, her time was dedicated to her mother, and continued to be so in Sweden. But when the mother died, in 1950, Nelly was suddenly completely alone, at sixty. So she started to write more. And her focus, her newfound focus, was the Holocaust. She had identified with the fate of European Jewry, the very fate she had herself escaped. Being a survivor gave her yet another exiled identity.

Nelly Sachs started publishing in her sixties. The same day she turned seventy-five she received the highest honor that can be bestowed upon an author – the Nobel Prize. It is a unique career. A career that ended as it had started, in oblivion.

The film about Nelly Sachs, The Stranger on Bergsunds Strand, traces her fascinating life, as well as her development as a poet. A poet of Exile. 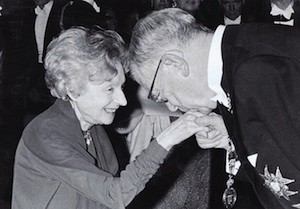