To try and explain my real feelings for Greta would be impossible since I really do not understand myself. I do know that I have built up in my emotions a person that does not exist. My mind sees the real person –a Swedish servant girl with a face touched by God—only interested in money, her health, sex, food and sleep. And yet her face tricks my mind and my spirit builds her up into something that fights with my brain. I do love her but I only love the person that I have created, and not the person who is real. /Letter from Mercedes de Acosta to Marlene Dietrich

On April 15, 2000, exactly ten years after the death of actress Greta Garbo, a box containing some fifty-five letters were opened at The Rosenbach Museum in Philadelphia. The letters were written from Greta Garbo to her friend Mercedes de Acosta.

Mercedes de Acosta was by profession a playwright and script writer. But in Hollywood, she was mainly to acquire fame because of her love affairs, with some of the most famous female stars on the screen and on stage. Marlene Dietrich wrote glowing love letters to Mercedes, as did Isadora Duncan, Ona Munson and Eva le Gallienne.

It was, perhaps, not so surprising that the opening of the box at The Rosenbach Museum met with a lot of attention from the world press, and from film buffs. Mysterious actress Greta Garbo – often referred to as ”the Swedish Sphinx” – had never gotten married, and after her sudden withdrawal from film, at age 36, she seemed to be living almost as a hermit, or at least as a person who did everything to evade attention. The lingering question many hoped to get answered was: Who was Greta Garbo? And what did her private sphere look like?

As it turned out, the box would not produce a clear-cut answer to the mysteries surrounding Garbo – or her relationship with de Acosta. But producer Lena Einhorn has, sparked by the newly awakened media interest, and an old interest of her own in Garbo, dug deeper into the archives, and found numerous letters and documentation on the lives of these two individuals, living in the midst of a bustling Hollywood in its prime.

Based on letters, biographies, de Acosta’s poems and autobiography, as well as other documentation, producer Lena Einhorn has made a documentary portrait of the very private Greta Garbo. Mercedes de Acosta, who knew Garbo for thirty years, until Garbo in 1960 broke all contact, will be our escort in this film, which follows Greta Garbo’s life — from her poverty-ridden childhood in Stockholm, to glamorous, but hated, Hollywood life, to exile in New York. 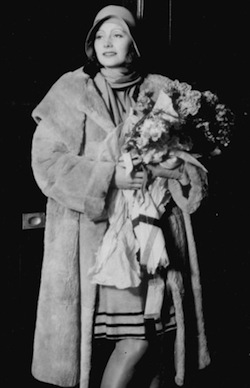