Hanna has just started her second education in two years. Her studies at the Art School were hastily interrupted, and instead she has now begun writing classes.

It is Monday morning, and the aspiring authors will for the first time meet Pål Berger, egocentrical and headstrong educator. Would you, he enquires, like to do a joint project? Without waiting for an answer, he pulls up seven small pieces of paper, and holds them up. They are ads, eight years old, and all with the same sender – who offers professional lessons in natural sciences, ballet, art, four musical instruments, and expert translations from six languages. Plus cleaning people’s apartments. Signed Madeleine F.

Now the students are told to portray this unknown woman in factional texts. Is she multitalented? Or simply a mythomaniac? For Hanna, the task becomes highly personal. She has to find out who this woman is.

Madeleine F. is a novel about searching. For a mystical, talented person, who seems to have vanished into thin air. For the solution to a riddle, which seems to be laid out to bewilder. And finally about the searching for inspiration and identity. 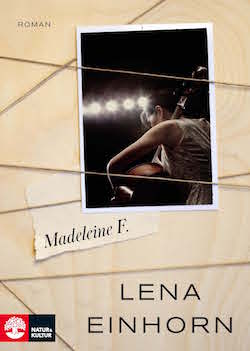 Einhorn, who is also a filmmaker, has an exquisite sense of tension and dramaturgy. It is hard to put the book down. Just like with Maria Gripe, there is a mystery here that constantly drives the reading forward. Who really is this Agnes Cecilia, this Madeleine F? It is well written and extremely thrilling.

Lena Einhorn masters the art of capturing the reader by placing that first piece of the puzzle so skillfully that you just have to read on to see how it goes… Madeleine F’s fate leaves Hanna no rest, and neither does it the reader: Who is she, or was she? Is she happy? Is she alive or dead? … Madeleine F is both an exciting and deeply serious story about a singular life and destiny.

In some uncannily distinct key scenes, Lena Einhorn lays out the clues in this unusual mystery, which is a concrete story with secrets that can be discerned. But the story gets bigger than the individual and goes from being diffuse to becoming deeply interesting: it is about human frailty and about the sadness at all the possibilities in life that run between your fingers like water, that cannot be contained. That child who was once so bubbly, what happens to it when it grows up? How easily can a talent be crushed?

”Madeleine F” is exciting as a psychological thriller… Einhorn skillfully and with great finesse exposes the dark mystery that rests over the main character’s life. Family relationships and psychologically complex games are Einhorn’s specialty.

With a strong sense of rhythm and gaps, Einhorn alternates Hanna’s everyday life with the existence of a Russian-Hungarian girl in the same city, decades earlier. … Madeleine F. is an atmospheric and well-written story about the search for inspiration and identity. The parts communicate seamlessly, deepen each other and make the book hard to put down.

For those who want to read the book, not too much should be revealed, it is really very captivating.

”Madeleine F” is built like a puzzle, where the pieces are added one by one until the whole picture becomes visible. I am gripped by Hanna’s search, perhaps not so much by the search for the woman herself, because pretty soon it is clear who it is, but rather by the search for her expression.

Einhorn is a skilled stylist, who builds her story with a keen ear for suspenseful dramaturgy. The story’s threads are many but they are woven together into a beautiful whole.

It’s hard to put ”Madeleine F” down. This is a book that is written as a page-turner… It is far from light and, unlike most puzzle novels, ”Madeleine F” stays in one’s memory for a long time. Like a question that can never really be answered. Like a human life – bigger and more complex than we can ever imagine.

Lena Einhorn’s masterful story touches deeply… This is a very well-written tale that can be read in more ways than one. As a discussion about identity and self-esteem. Or as a debate post on the integration issue. Or as a sharp criticism of the betrayal of the adult world. Or all of the above. In any case – a good book it is, mysterious and exciting and thought-provoking.

Lena is an amazing writer… This is such a warm story, it is not just any fiction story, but one that endures. And it has a lot of depth too.